THE AGPI CONVENTION IS SCHEDULED FOR APRIL 20-23 2023.  The 2023 convention will be held in West Palm Beach, Florida. There will be plenty of opportunities for gaming and puzzling as well as our regular sales, educational, sharing, swapping, and other activities. West Palm Beach can be reached via the West Palm Beach, Fort Lauderdale, and Miami area airports.

Hotel Reservations: The convention will be held at the Embassy Suites West Palm Beach Hotel located at 1601 Belvedare Road, West Palm Beach, FL.  We have reserved a block of rooms.  Attendees are encouraged to make their reservations early to ensure you get a room at the block rate of $179 + tax per night; this rate includes breakfast and free happy hour for every night you stay.  Make reservation directly by going to:

The excitement and anticipation of getting together in person with everyone was in the air!!  When we arrived at the Holiday Inn in Fredericksburg, Wednesday evening, the 11th, we were searching around for familiar faces…masked and unmasked!!  Ahh, before us was Dick and Ellie Moody, then Dave and Patsy Beffa-Negini, Dave Thomen and Rick Tucker   We’re BACK!!!!

We grabbed a bite to eat and off to The Escape Room for us “early birds”.  It was soo much fun.   We laughed our way through the room and made it by about 30 seconds!!

Thursday morning, after breakfast, those of us who signed up for the Tour of Colonial Fredericksburg and the Civil War Battlefields piled into the bus.  Our Tour Guide was so knowledgeable about the city, it’s expansion and determination to keep historic sections intact.  He was also a civil war historian, who took us to sites of major battles of the Civil War.  We visited Chatham Manor, the site from which the first surprise attack by water was waged by the Confederate army at the unsuspecting Union Army at night on a barge that was built across to Chatham Manor.

We also visited the site of the bloodiest battles of the Civil War.

Confederate soldiers were strategically placed behind a stone wall along the Sunken Road. The battle resulted in significant casualties for the Union Army. The entire Battles of Fredericksburg (there were two battles fought) resulted in 12,653 Union casualties and 4,201 Confederate casualties.    We walked the wall.  I must say it was eerie and I felt the ghosts of soldiers lost.  I am now determined to learn more about The Civil War.

Then onto a winery and pub.  We were hungry!  We took the opportunity to choose flites of wine for tasting.  Back to the hotel for a little rest and relaxation before going to a FredNats Ballgame.  Brave fans we were sitting through torrential rain.  After taking pictures with “Fred”

Friday was breakfast and guest speakers compliments of two U.S. government agencies.  The speakers were so interesting.  I know most of us came away educated in the “ins and outs” of patents and trademarks and the terms as used to categorize games and toys.

The US Patent and Trademark Office sent Julie Brocketti, the Quality Assurance Specialist in Technology of the US Patent & Trademark office as guest speaker.  She imparted the ways that patent and trademarks are applied to technological games and puzzles as well as her love of board games.    David Duffy is an examiner of electronic games and amusement arts.  He spoke to us about the process of examination and comparison of patents via Zoom.

Our next guest speaker was Paul Wood, a retired U.S. Naval officer; who became an entrepreneur after falling in love with escape rooms.  He and his wife have Rush Hour Live Escape Room in Fredericksburg.  He explained the business models and the planning that goes into building an escape room: its pros and cons.

Our final speaker was Dr. Claire Jerry, the Lead Curator with the Political History Division of the National Museum of American History.  She spoke of fascinating political history.  She talked about some of the political games in the museum’s collection.

Afternoon activities included Table Sales, Theater (MOVIE) presentation for those who wanted to fall asleep for awhile .  The Camelot Tournament Elimination Round was in full “combat” mode.  Camelot is the famous Parker Brothers game invented by George Parker. 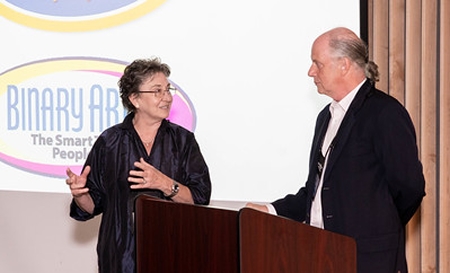 Friday evening’s “Featured Speaker” was Bill Ritchie, the co-founder, with his wife Andrea, and president of Binary Arts, now ThinkFun game company, which was purchased by Ravensburger company in 2017. Bill spoke of his passion for puzzles and his belief that games and puzzles strengthen children’s thinking skills preparing them for the future challenges of technology and life’s puzzle.  It was his and Andrea’s, reason for creating the original Binary Arts.

After Saturday Buffet breakfast our scheduled was full of presentations from our AGPI members: Bob Finn spoke on cataloguing game collections using BGG; Joe Seymour on 25 Decades of wooden jigsaw puzzles; and Dave Thomen on “Camelot the Game”.  All of three of our speakers were so informative and garnered the interest of members.

We broke for lunch.  Some of us were lucky to go into downtown historic Fredericksburg for walks in and out of small antique stores and a local luncheonette.   Upon returning there were “Table Sales” of games and puzzles lasting about 3 hours with great deals.  All of this happening while the Camelot players were “jousting” to see who would win the Tournament.   Off to prepare for our Award Dinner, Group Photo and Reception. 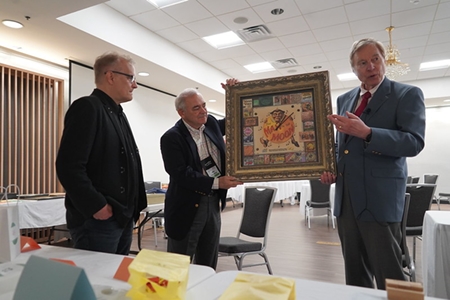 The AGPI Award Recipient was Wayne Kirkpatrick, who is an artist, song writer and musician whose hobby, repurposing damaged boards of games and creating clocks out of vintage board games, creating nostalgic pieces of art.  This creative spirit led to his passion for the history of board games and thus to immersing himself in research and producing a documentary of the dawning of the game industry in America. 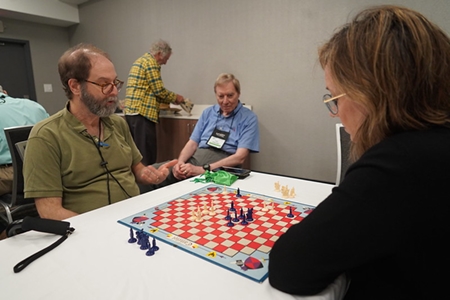 Long day!!  Time to get a good night’s rest…. well maybe after an hour or so of puzzles and games together in the “GAME ROOM”.  AGPI members are never too tired to play!!

Sunday, a breakfast Buffet was had by all.  Goodbyes to those traveling on.  The rest of the morning was about AGPI Board announcements and a presentation informing all members of the upcoming 2023 Convention to be held April 2023, in West Palm Beach, Florida, hosted by Bob Finn and Suzanne Pearlman.  All members are excited and truly looking forward to being together again in 2023!!

The 2019 AGPI convention held in Denver, CO is history.  Here's a recap of some of the events held during the convention.

Some attendees arrived a few days early to visit some nearby attractions in Colorado.  This included trips to the Contential Divide, Georgetown Loop railroad, and mountain wildlife. 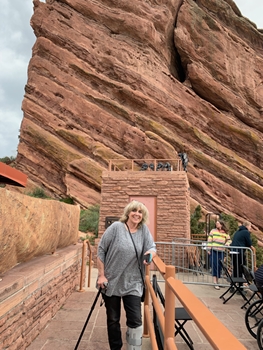 The convention started on Thursday with a bus trip to the Red Rocks Park, Buffalo Bill Cody's Grave & Museum, Coors Brewery, and the Colorado Railroad Museum. 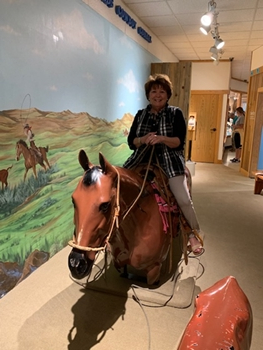 On Saturday morning, we enjoyed a presentation by the design team of Joyful Nook puzzles from Durango, Colorado. Denver game designer, Mike Fitzgerald, spoke about his experiences designing card and table games.

Saturday evening, we watched a team of puzzlers (John Cabot, Penny Melling, Joe Seymour) lose to a team of gamers (Rick Tucker, Helen Andrews, Steve Stanchina) in the "Game of Phones". The puzzlers led most of the game. However, the final Double value puzzle was solved by Helen Andrews. The final score was Gamers 37 Puzzlers 36.

The highlight of Saturday evening was the presentation of the Outstanding Achievement Award to John Ellerbe. This event started with a slide show of John from the last 20 years. The surprise of the evening was when John started "dancing" near the end of the slide show! Next, Debby Krim sent a video message to AGPI members and John. A Skype call to Bruce Whitehill provided some laughs. This was followed with an 19 minute video interview with John at his game musuem in South Carolina.

Sunday morning the convention had a roundtable discussion about Kickstarter and the games industry. Jacqueline Hess discuss her failed Kickstarter project and the lessons learned from the project. Keith Meyers, a game designer and owner of the Board Game Republic cafe, talked about his experiences in the game industry. Phil Orbanes gave a update on the current status of the game industry.

Thanks to all for making this a successfull convention. See you next year in the Washington D.C. area for the next AGPI convention.

This video is the powerpoint presentation of Joyful Nook Gallery.  Click on the YouTube logo to view the video in full screen mode. 10 minutes

This video is the "Game of Phones" that was played on Saturday night at the convention. Play along an see if you can beat the total score of 73.  Click on the YouTube logo to view the video in full screen mode. 17 minutes

This video is slide show of John Ellerbe convention attendance during the last 20 years.  Click on the YouTube logo to view the video in full screen mode. 10 minutes

This video is a message from Debby Krim to John Ellerbe and the AGPI members at the convention.  Click on the YouTube logo to view the video in full screen mode. 2 minutes

This video is a Skype phone call to Bruce Whitehill in Germany. Bruce congratulates John on his perfect record of convention attendance for the last 35 years.  Click on the YouTube logo to view the video in full screen mode. 4 minutes

This video is an interview with John Ellerbe at his game museum in South Carolina in January 2019.  Click on the YouTube logo to view the video in full screen mode. 19 minutes

A complete onlilne photo shoot of the convention will be available soon from Rick Tucker.

The AGPI has released its 30+ years of publications to the public on their website.  This includes the Quarterly, On the Table newsletter, Game and Puzzle Collectors Quarterly, Game Researchers' Notes, and Game Times.  Over 130 publication are now available in Flip Book format.  The AGPI publications are devoted to the collection and preservation of games, jigsaw puzzles, and mechanical puzzles, and to the research on the people and companies that invented, designed, manufactured, and/or distributed them. 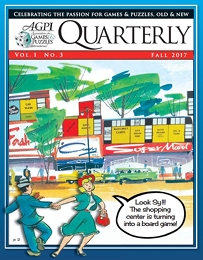 The 10 most recent issues of the AGPI Quarterly magazine are only available to AGPI members.  Become an AGPI member today and get access to the entire archive.

The Association for Games & Puzzles International (AGPI), founded in 1985 by Bruce Whitehill, is the world’s foremost organization dedicated to the collection and preservation of games and puzzles.

As an international, nonprofit association, the AGPI is chartered to conduct research and explore the history of games and puzzles from ancient times up to the present, and to disseminate information about games and puzzles to the broadest audience possible, including the general public, the media, libraries, museums, scholars, and others. Games and puzzles offer a remarkable view of our cultural past and future!

AGPI members’ interests encompass all types of games, jigsaw puzzles, and mechanical puzzles, from all eras and from all around the world. Some of our members specialize in other pastimes and collect related playthings, from toys to tops, and from marbles to architectural blocks. Our membership includes a broad spectrum of individuals and expertise, from interested enthusiasts to novice collectors to some of the world’s most renowned historians, authors, and designers of game & puzzles. Many companies and institutions hold membership in the organization.

Originally known as the American Game Collectors Association (AGCA), the organization’s name was changed to the Association of Game & Puzzle Collectors in 1999 to reflect the broadened scope of its mission and its international nature.

Our members have voted to change the name of our organization to the Association for Games & Puzzles International.

Watch this video to gain an understanding of the features and membership profiles available to AGPI members.  Click on the YouTube logo to view the video in full screen mode.

Click on user name to see the user's profile page.